Go to content
HS2 trains will bring Britain closer together.

HS2 is a new high speed railway linking up London, the Midlands, the North and Scotland serving over 25 stations, including eight of Britain’s 10 largest cities and connecting around 30 million people.

The construction of the new railway is split into three phases – Phase One linking London and the West Midlands; Phase 2a linking the West Midlands and the North via Crewe; and Phase 2b completing the railway to Manchester and Leeds.

How does it work?

By building a new railway line, HS2 takes fast trains off the existing railway and places them on to their own dedicated tracks, better connecting our major towns and cities. This then allows slower, local trains to bunch up on the existing lines, freeing up space across the country for many more commuter services and freight trains.

Phase One is 140 miles of dedicated high speed railway with four brand new stations at Euston; Old Oak Common in northwest London; Interchange station east of Birmingham; and Curzon Street in Birmingham. High speed trains will deliver shorter journeys with more seats as they travel through more than 32 miles of tunnels and across 10 miles of viaducts. Phase One also links to the existing railway to provide direct onward services to northern England and Scotland and will open between 2029 and 2033.

Find out more about building Phase One.

HS2 Phase 2a will extend the high speed rail line north from the West Midlands to Crewe, helping towns and cities across north western England, north Wales and Scotland benefit from it sooner. The Phase 2a line will run from the northern end of Phase 1 at Fradley in the West Midlands to Crewe in Cheshire. There services will join the existing rail network to create direct services to places including Liverpool, Manchester, Preston, Carlisle and Glasgow. Crewe is also the station for connections to North Wales and Shrewsbury.

Find out more about Phase 2a.

The Phase 2b line forms a Y shape, split into an eastern and a western leg. The western leg will connect to the high speed lines at Crewe and run through to Manchester. The eastern leg will connect to high speed lines in the West Midlands and run through to Leeds. Services will also travel onward to places like Glasgow, Liverpool, Preston and Wigan.

Find out more about Phase 2b.

The government is drawing-up an integrated rail plan for the North and Midlands, to identify the most effective sequencing of relevant investments and how to integrate HS2, Northern Powerhouse Rail and other rail investments. This plan will be informed by an assessment of the rail needs of the Midlands and the north undertaken by the National Infrastructure Commission.

Once operational, HS2 will serve over 25 stations connecting around 30 million people. HS2 will significantly improve connectivity in the North and Midlands and will also integrate the existing network serving stations into Scotland, creating 500,000 extra jobs and 90,000 homes around HS2 stations.

There are three main benefits of HS2:

Find out the facts about HS2

The construction of HS2 will show the world the very best of British skills, innovation and ambition.

Find out more about the building of Phase One.

HS2 trains will serve over 25 stations connecting around 30 million people. HS2 will significantly improve connectivity in the North and Midlands, and will also integrate with the existing network serving stations into Scotland. 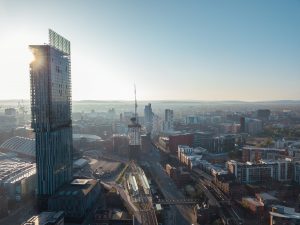 HS2 is more than a railway. It is the most important economic regeneration project in Britain for decades. We are joining up Britain to help build a more united country. So, every region of the UK can reach its economic potential, creating jobs and opportunities for millions of people. It will improve living standards, increase productivity and help Britain compete on the global stage. Local economic plans based around HS2 show almost 500,000 jobs and nearly 90,000 new homes. Visit our station pages to learn more about the benefits to the cities and regions they serve. Or find out more about Connectivity 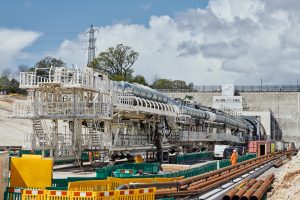 HS2 is at an advanced stage. Parliament has approved the construction of Phase One and work is well underway. There are over 200 active work sites between London and Birmingham. Our aspiration is to be a good neighbour every single day, by respecting the people and communities we impact and being sensitive to their needs. Building Phase One of the HS2 route will support 22,000 jobs, including many apprentices. Around 2,000 businesses have already delivered works for HS2, 60% of which are SMEs and 95% are based in the UK.

Find out more about the jobs boost created by building HS2. 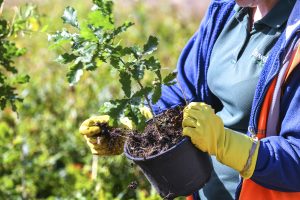 HS2 is Britain’s biggest environment project, delivering miles of ecological and landscape investments alongside construction. Find out more about the huge scale of environment work and the benefits for nature.

To date, 60 new wildlife habitat have been created along our route. Grassland, ponds, and plantings now support reptiles, badgers, birds, and bats. The route design will also ensure wildlife has access across it As well as 64 miles of tunnels on HS’s Phase One, there will be 150 bridges and underpasses. 16 will be specially designed green bridges covered in planting.

Find out more facts about HS2 and the environment.

So far, hundreds of thousands of trees have been planted on the route. Eventually, 7 million trees and shrubs will be planted between London and Birmingham alone.  HS2’s new woodlands and hedgerow planting creates 33 square kilometres of new woodland and habitat for wildlife. That’s 30% more than what’s there now. the planting also helps join up existing habitats too. HS2 is also funding new local native broadleaf woodlands and the restoring of existing ancient woodlands. Already £1.2m of the £7m fund is supporting 25 projects: 103 hectares of new woods and restoring 63 hectares of ancient woodland.

Find out more about HS2 and woodlands.